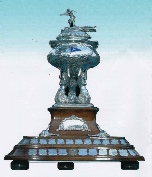 Hydroplanes could be described as the "open wheelers' of boat racing. These boats are specifically are designed to go fast! They do not particularly have any other purpose.

Hydroplanes are designed to ride on a cushion of air. The sponsons on either side of the boat create an air trap under the main portion of the boat. As the air is trapped under the boat, the resulting pressure effectively lifts the boat out of the water, causing the boat to "plane" on top for the water. This style of boats are very spectacular to watch as they dance over the waves.

Hydroplane classes range from 1.6 litre restricted up to the supercharged Grand Prix Hydroplanes. There is also the class of Unlimited Hydroplane which include such powerplants as Rolls Royce Merlin engines and in the past has included Jet Turbines

For more information and illustrations displaying the anatomy of a hydroplane, visit the NSW Hydroplane Club's website. 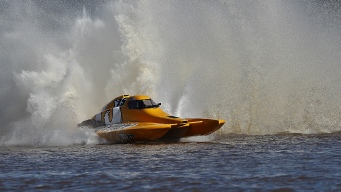 These classes are the most active hydroplane classes in Australia at this time:

Unlimited Hydroplane - The biggest and baddest hydros in Australia. There are only a handful of the se boats left in the country. Powered by such engines as Rolls Royce Merlin V12s. Boats can measure up to 30 feet in length.

Grand Prix Hydroplane - The Grand Prix Hydroplane class is of international standard with competitors in New Zealand, U.S.A and Canada. Hulls are manufactured from conventional timber to the most modern composite materials available. Size of these craft are generally 24 feet in length and are powered by either supercharged or turbo charged Chevrolet engines producing some 1600 hp, propelling the craft up to 170 mph in race conditions.

6000 cc. Hydroplane - This class is only bound by engine capacity. The most prominent engine is the 350ci Chev V8.

5200 cc. Hydroplane - This class is only bound by engine capacity. The most prominent engine is the Holden 308ci V8.

4.2 Litre Stock Hydroplane - These boats run a stock 4.2 Litre / 253ci Holden V8. Some modifications can be made in regards to running a 4 barrel carby, camshaft selection, but it is essentially a stock engine.

1.6 Litre Hydroplane - These boats run a stock 1.6 litre Toyota Twin Cam engine. Some modifications can be made in relation to the replacement of the factory injection with Weber carbs. This class originally began as the Formula Ford class running the 1600cc Kent (Escort) Ford engine. Scarcity of parts caused the update of engine choice.